“Not directly. No,” Keen said about the Bearcats’ 5-2 defeat to Fife, which prevented his team from successfully defending their state title. “I think the girls had pretty high expectations coming into this year because of last year’s loss though. I think they came in expecting to win.”

W.F. West was, by all accounts, the best team in the state last year, which made the semifinal loss sting that much more.

A year later, the Bearcats found the perfect remedy, however, bullying their way through this year’s Class 2A state tournament, which they capped with a 5-1 victory over Port Angeles in the title game at Carlon Park in Selah to secure the program’s second state championship over the last three years.

“It was just a great season and a great group of girls to coach,” Keen said.

W.F. West (22-3) jumped on the Rough Riders, who had shutout their three previous state opponents, early in the title game, getting an RBI double from Kindra Davis in the first inning followed by a Kyndra Haller home run in the third.

Senior pitcher Lexie Strasser did the rest, fanning nine with just one walk. It was a stellar performance in a high school career filled with them for Strasser, who will play next year at Central Washington University.

“Lexie went from pitching a no hitter in the district championship game (against Ridgefield) to giving up just one walk in four games at the state tournament,” Keen said. “It’s really impressive how she played.”

Strasser was dominant in the semifinals against an Ellensburg team, which came in with plenty of offense backed by a 23-1 record.

The Bulldogs had no answer for Strasser as they could only manage two hits and struck out seven times in the 4-0 loss.

Strasser was equally dangerous at the plate against Ellensburg, smacking an RBI double. Ashlee Vadala and Paetynn Lopez both drove in runs, helping the Bearcats return to the state championship game for a third time since 2012.

The Bearcats will graduate five seniors from this year’s team, including Strasser, Haller, Kim Frazier, Ashley Hoven and Jordan Crawford. The class certainly left their mark on the program, posting a combined record of 73-8 over the last three seasons with three consecutive state semifinal appearances, two state championships and one third-place trophy.

“I don’t think you can replace that senior class and what they’ve meant to the program,” Keen said, “but we should have a pretty good team next year as well. The girls are already talking about it.”

Despite the players lost to graduation, W.F. West should once again be one of the top title contenders next year as the Bearcats will welcome back Olivia Dean, Vadala, Lopez, Paytton Crawford, Annika Waring and Davis, whose three-run home run in the first inning highlighted W.F. West’s 9-2 victory over White River in the state quarterfinals.

“People always ask me what my fondest memories are with these teams,” Keen said. “And it’s not winning state championships. It’s just being able to work with these great kids. Winning is nice, but that’s what I’ll always remember.”

The W.F. West baseball team came within one victory over joining its fastpitch counterparts as Class 2A state champions.

The Bearcats, which entered the title contest on a 19-game winning streak, fell in the finals to Ellensburg, 5-1. No school has ever won both baseball and fastpitch championships in the same season in the 2A classification.

Seeking its third state title over the last eight seasons, W.F. West (22-3) advanced to the finals after defeating Anacortes, 7-2, in the semifinals.

Ellensburg, which knocked off the Bearcats last season in the state quarterfinals, collected just three hits in the title-clinching victory, but benefitted greatly from six costly W.F. West errors.

Like they’ve done all season, the Titans ran roughshod through the competition at the 2B state fastpitch tournament.

After dismantling Ocosta, 28-2, in the semifinals, Pe Ell-Willapa Valley closed out its 24-1 season by defeating league rival Napavine, 10-1, in the state championship at the Gateway Sports Complex in Yakima.

The Titans, whose only loss this year was a 7-6 setback to eventual 1A state champion Montesano, defeated Friday Harbor, 4-1, in the first round and Liberty Bell, 23-3, in the quarterfinals as they outscored their state opponents a combined 65-7 during the four-game run. 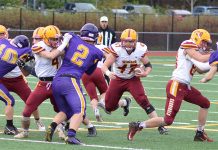