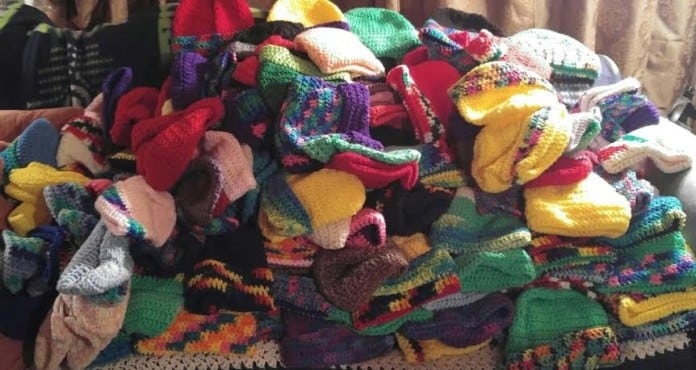 As temperatures warm, it’s hard to imagine the weather turning chilly, but for local philanthropist Bobbie Moran, the thought of winter is never far from her mind. Moran is the creator of Angels of Warmth Hats for the Homeless, a charitable enterprise that donates handmade hats to the homeless of Lewis County.

Angels is a “pay it forward” dream come true for Moran, who is the tireless leader of an assembled brigade of fiber artists who have found their talents can provide comfort to those less fortunate.

Five years ago found Moran with time on her hands due to an injury. “I couldn’t do much more than sit,” she says of her convalescence. An avid fiber artist, she created many gifts for family and friends. Eventually she ran out of people to give to. “I had crocheted all the kids blankets,” she said. As a result, she became “depressed and frustrated,” she says.

Her friend Kathy Brown, who was making hats for veterans at the time, provided just the inspiration she needed to turn things around and make an impact on our community.

“She was my inspiration,” said Moran of Brown. “I decided I could do something in Lewis County to help the homeless and needy in our hometown.”

Moran, who had had a first-hand brush with homelessness herself, was acutely aware of the plight of homeless people in our area.

“My sister and brother-in-law took me and my husband in,” she says. “They gave us a hand up, not a handout.” It was then that she was called to this “pay it forward” mission, as she describes it.

In her first year, she made all the hats by herself. “I made two yard bags full!” Moran says. During the second year she recruited the help of her sister, Linda Henry, and they donated all their hats to the Centralia Mission and the soup kitchen in Rotary Park.

It was during the third year of Angels of Warmth that she started to get outside recognition, and began receiving donations of yarn to sustain her work. “My friend, Terry Comins, sent me yarn from New York to help my mission,” she says. With the help of her sister, they were able to produce 250 hats that year.

By the fourth year, they were rolling! she says. “I met this wonderful woman, Theresa Burton. She had tons of yarn,” she says. Burton gave her a lot of yarn, which inspired Moran to make even more hats for Angels. “We went to every thrift store for more yarn.” By the end of that year, they had made 500 hats for Angels of Warmth.

It was time, Moran thought, to really ramp up production for their fifth year. It was then that she decided to produce one thousand hats for Angels of Warmth. She knew it was going to be too big of a job for just her and her sister, so she started to assemble her brigade. Her campaign started online and she emailed friends all over the country to join her.

Her tenacity, and her powers of persuasion, paid off. Joining her team were Marita Gaiter, a “crocheting fool”, Jill Edwards Smith, from North Carolina, Pamela Marie, from California, Betty Arquitt, from New York and Laura Lane and Teasha Lynch from Tacoma.

Although she had assembled a small army of excellent fiber artists, she was still apprehensive about whether or not she would be able to meet her one-thousand-hat goal.

After distributing the donated yarn around the country, the hats started rolling in. Some were able to produce profuse amounts of hats for our Lewis County homeless. “Marita Gaiter did 250 hats before she left Germany!” notes Moran.

Eventually, in September, the goal was met. Unsurprisingly, that victory only inspires Moran to reach an even greater number of needy people in our area. “The need is great,” says Moran.

Angels now has five liasons: Lynda Henry, Mikaela Marie Hills, Alana Benado, Janice Hilderman and Samantha Kennedy. “Bless these five ladies,” she says. Because I cannot handle all that God has laid before me, these ladies stepped up to the call.

Angels of Warmth exists not only on the labor of these extraordinary women, but is also sustained by donation. “It’s all done solely on donations,” said Moran. “We take all types of yarn, full or partial skeins.”

People interested in contributing to the cause can help Angels of Warmth by donating any hats, scarves or gloves that they have already created. For those who aren’t so confident in their hat making skills, Angels also accepts cash donations, checks, and gift cards to Michaels, Joann’s, Walmart and Costco in order to keep up with the demand. But the need doesn’t stop there. “We take cases of instant CUPS of chicken soup to put in our hats,” added Moran

Angels of Warmth is always looking for people to join their fiber producing brigade. “People are invited to crochet, knit, or loom hats,” says Moran.

Hat makers can use their own yarn, or if they need yarn, because of the support of those who have already donated to the organization, Angels has yarn to provide for them. “We graciously welcome all of the generous creators’ help that we can get!”

Through her leadership and her drive, Bobbie Moran has ensured that Angels of Warmth has kept the heads of many men, women and children in Lewis County warm and protected during the winter months.

Even though her goals are ever increasing and the call for help seems to grow ever louder, without a doubt, she will continue to do just reach out to those who need it most. “I’m not rich in money, but I’m a millionaire in faith,” she says.

To donate to Angels of Warmth, contact their facebook page at Angels Of Warmth, email Bobbie Moran at angelsofwarmth_2010@yahoo.com, or drop your donations off at the following locations:

For those who wish to support Angels of Warmth Hats for the Homeless in person. Angels is hosting their second annual yarn drive on Saturday, June 11, at Rotary Park in Centralia from 12:00 pm to 3:00 pm. There they will be happily accepting donations for the 2016-17 season. “Look for the balloons,” says Moran.