No matter where you live, what you do, or where you go, you’ll always be surrounded by something, be it beauty, nature, darkness, light, sorrow, happiness, friends, family, and strangers — the list is endless. Even history surrounds us daily, though it may be overlooked as times change and the old replaces the new. This is why historic buildings in Lewis County are extraordinary, as they’re one of the few places left where you can be encircled by the past once you step inside.

Those who check in to Mineral Lake Lodge can enjoy an extended stay in history. Built in 1906, it was initially created to function as a hunting lodge known as the Mineral Lake Line. The three-story cedar log lodge was constructed by Scandinavian residents of the area who were experienced old-world craftsmen who definitely knew what they were doing, as the building has been up and running ever since.

A wealthy young investor from the east by the name of Gilfellin paid Herman and August Ahstrand and Johann Carlson to complete the job with to serve as a high-brow wilderness retreat for the fiscal elite of Seattle and Tacoma. In the end, these stressed-out executives would come to enjoy the lake’s mineral-rich waters to recharge while hunters and sportsmen stayed for winter gaming. Rumor has it that Teddy Roosevelt even graced the lodge with his presence in 1910 during some much-needed relaxation time for the hard-working 26th President.

There’s history in the woods at Gifford Pinchot National Forest. The Randle Ranger Station-Work Center has been a focal point for those who keep watch over the land since its creation in 1935 by the Civilian Conservation Corps. In total, it encompasses seven contributing buildings, including an office, a shop building, a warehouse, and a fire station in a five-acre area. The center was designed by the USDA Forest Service Architecture Group in a rustic architectural style that’s indicative of the time and helped to secure the center’s spot on the National Register of Historic Places in 1986.

Nestled among the pines in the history-filled Gifford Pinchot National Forest is a quaint little abode known as La Wis Wis Guard Station No. 1165. Formerly known as Clear Fork Guard Station, it was built in 1928 at the confluence of the Clear Fork and Ohanapecosh Rivers, also by the Civilian Conservation Corps. Listed on the U.S. National Register of Historic Places in 1986, this one-and-a-half-story wood-frame structure in rustic style portrays a simpler time in the region’s history that will make you feel as if you’ve stepped into the past as you explore the stunning La Wis Wis Campground.

If you’ve found yourself driving down Washington Avenue in Centralia, chances are you’ve caught a glimpse of the past. The Frances and Mina Hubbard Bungalow has called the avenue home since its creation in 1908. Frances Hubbard, who owned Eastern Railway and Lumber, one of the largest mills in Southwest Washington, had it created for him and his wife, Mina.

What truly makes the bungalow remarkable, besides the fact that it’s a well-known work of Tacoma architectural firm Bullard and Hill, as well as master builder J.C. Dickson, is that the bungalow has unique characteristics of the Arts and Crafts movement in architecture, boasting Rockwood tile fireplaces and extensive decorative painting and stenciling. The home is a beautiful piece of history indeed.

Every mayor needs a home worthy of their title. That’s why there’s no denying that the George E. Birge House, which once housed the twice-elected Mayor of Centralia, who also served on the city council, is an exquisite example of the Queen Anne architectural style adopted for a small city.

The home is just one of many in the city’s Edison District that depict this architectural charm, along with Craftsman and Tudor-style houses, which gives the neighborhood a rare and diverse style.

Lewis County’s claim to political fame doesn’t stop at the George E. Birge House. The O. B. McFadden House was once home to Obadiah B. McFadden, a man President Franklin Piece named a temporary Oregon Territorial Supreme Court member in 1853. This appointment would lead to a very lucrative career in politics for McFadden as he would go on to be sworn in as a justice on the new Washington Territory’s Supreme Court the following year.

From there, he would take over as Washington’s Supreme Court’s Chief Justice in 1858, serving until 1861. The sturdy story-and-a-half log cabin was constructed in 1859 during this time. McFadden called the house home during his time as Washington Legislature’s Council Chamber President, from 1861 until 1864, all the way up until he was elected the Democratic representative for the Washington Territory in Washington, D.C., in 1872.

These historic buildings are just a few locations sprinkled throughout Lewis County, marking the area’s history today. Longmire Campground has several comfort stations within Mount Rainier National Park for those interested in immersing themselves in history and nature at the county’s edge. Alternatively, places like the Chehalis Downtown Historic District, Hillside Historic District, and various Centralia neighborhoods surround you with history while allowing you to enjoy a night out on the town.

Do you have a favorite historical building in Lewis County we forgot to mention? Email us at submit@lewistalk.com and let us know which one you enjoy! 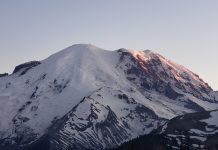