Did you know Napavine is home to a rising star in the world of mixed martial arts (MMA)? Tasha Cleveland is a highly dedicated and ambitious practitioner and has trained six to seven days a week for over two years. In addition to honing her skills in the art of Brazilian Jiu-Jitsu, she’s preparing for her 18th birthday, when she can finally participate in an amateur fight with the potential to be seen by an official MMA recruiter.

Tasha was in fifth grade at Napavine Elementary when she brought home a sign-up sheet for the wrestling team. At her dad’s encouragement, she signed up on a whim. It was a sport she’d never considered. “I cried every single day because I hated it,” Tasha laughs.

She didn’t enroll in sixth grade, but when she got to seventh grade her math and science teachers were Napavine Junior High’s wrestling coaches and encouraged her to give it another try. She found herself wanting to rise to the challenge of something that had been hard for her and begged her parents to let her try again.

Tasha transferred to W.F. West High School in Chehalis her freshman year. George Dodd coached the wrestling team and saw some very real talent in her. He suggested she investigate training at a Brazilian Jiu-Jitsu gym to up her wrestling game.

Soon Tasha was getting a ride to Olympia several times a week to practice at the United Training Center. Here she started learning the art of Jiu-Jitsu. Jiu-Jitsu differs from wrestling in that you are not trying to pin your opponent to the ground. In Jiu-Jitsu, you are trying to outmaneuver your opponent into a state of submission. Practitioners do not divide themselves into weight classes. So goes a famous quote from Jiu-Jitsu co-founder Helio Gracie, “Always assume that your opponent is going to be bigger, stronger and faster than you so that you learn to rely on technique, timing and leverage rather than brute strength.”

Coaches move and gyms close, and that’s how Tasha ended up training regularly at The Base in Vancouver. After she got her driver’s license, Tasha drove an hour each way to attend a class at 5:45 a.m. every day and be back in time for school in Chehalis at 8:00 a.m. She was also on the high school wrestling team with practice right after school. She ran several miles most days, and strength trained with a Bulgarian weighted bag called a suples (SOOP-lays) at home before bed. Some days she drove back to the gym in the evenings for another class or open mat — when drills are over and the practitioners turn into competitors and test their skills.

In the months before the COVID-19 pandemic, Tasha and her parents had already decided her senior year should be homeschooled so that her schedule could be more flexible. The arrival of the pandemic closed her gym for several months, but her resolve to train was unshaken. “The pandemic has really affected the way that I train, but I still get as much work done as I can,” Tasha explains. The gym had reopened for several months, running distanced drills and strengthening exercises as well as suples classes both in-person and virtual.

The last round of closures was emotional for Tasha and her fellow practitioners. She’s already participated in several virtual classes. The suples workouts translate especially well to the home space. Her coach has several family members at home who practice, so they’re able to demonstrate maneuvers, and encourage students to try them out on family members. Tasha has successfully recruited her little sister to help her run drills.

Tasha continues her homeschooling work, her training regimen and works at Sahara Pizza to pay for all her gas. She still has her eye fixed on her 18th birthday and has already exchanged messages with the host of an amateur MMA fight venue in Portland who promises to put her on a card once she’s old enough. She’d like to be spotted by a professional MMA recruiter and get into the Ultimate Fighting Championship (UFC). “I realize it’s a chance thing,” she says. “Every single fight has to be your best performance.”

While getting into the UFC has been her goal for years, she’s leaned hard into her Jiu-Jitsu practice in the last year. She sees Jiu-Jitsu masters practicing and winning championships well into their 60s. While the glory of a UFC win would be epic, Tasha knows that that style of combat is hard on a body. Her Jiu-Jitsu practice is something she can sustain for decades.

To any young person curious about mixed martial arts, “Just put yourself out there,” Tasha says. “If you don’t enjoy something right away, try pushing through it. If you don’t think you’re strong enough, know that you can get stronger.” This is what she loves the most about her MMA practice. “There is always something you can improve on.”

Whether or not Tasha makes it into a UFC ring, she is a rising leader in the realm of and an inspiration to anyone who’s ever wanted to try something new. Follow her on Instagram, and she’s more than willing to answer any questions about Jiu-Jitsu, suples or anything else related to her story. 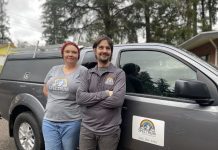