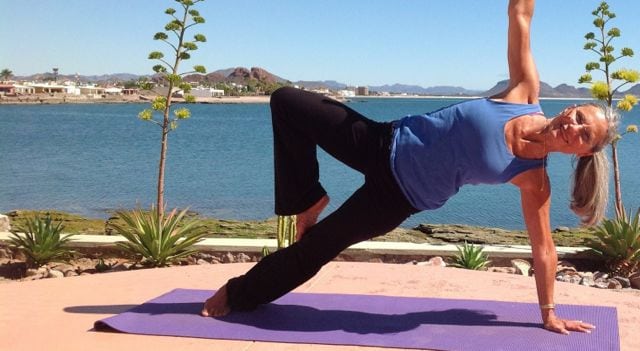 Ask most people to describe what a yoga teacher looks like, and it’s likely the image doesn’t include grey hair.

But both are part of the yoga life for Cherie Althauser, whose side plank could be the envy of the most youthful yogi. At 65 years and more flexible than many twentysomethings, she’s a walking advertisement for staying active past retirement.

“I started out with a ‘Yoga for Dummies’ video,” explains Althauser, who has practiced since 2004 and began teaching yoga in 2012. “It just grabbed onto me.”

The chair comes into her yoga classes as a prop, along with blocks, straps, blankets, bolsters—whatever helps students safely and comfortably get into the postures. Once Althauser had them place a tissue on the floor and pick it up between their toes, over and over again. It was a demonstration of what we lose after a lifetime on our feet, wearing shoes, and what we can regain with simple practice, or movement with intention.

What motivates Althauser to teach yoga, when she could be fully retired? “I wish so much that more people in Lewis County could experience the joy of movement, the joy of being free in their own bodies,” she says.

Althauser divides her time between Mexico in the winter and Lewis County the rest of the year. She teaches at Embody Movement Studio & Lifestyle Boutique in Centralia and is very passionate about the place, which just celebrated its second anniversary.

“I’ve known Owner Christina Wolf and her family since Christina was a baby,” says Althauser, retelling the story of Embody’s founding. Wolf originally set out to open Embody as a self-proclaimed “grief project,” after struggling with infertility. “She dedicated all her energy into creating this movement studio, this sacred space in which her community could evolve,” Althauser explains. But Wolf found out she was pregnant shortly before Embody opened its doors, giving her two blessings in one. “She is very in touch with her inner self,” says Althauser. “I wanted to be part of the environment she creates.”

Althauser’s praise of Embody and its owner are well founded. After just two years, the studio is a standout, warm and inviting, with groups of indeed joyful students gathering before and after classes to talk and make social plans. The studio’s most unique offering, and the passion of its owner, is a barefoot dance class called Nia. Most, if not all, of the studio’s classes are accessible to someone who’s never practiced yoga or Nia before.

When not teaching chair yoga, beginning hatha, and other classes at Embody, Althauser teaches yoga to retirees in San Carlos, Mexico. “There’s so much therapeutic value in it,” she says. “With props, especially, even a student who struggles to get down to and then back up off the floor can experience the benefits of movement.”

There she teaches through an organization called Castaway Kids, which helps raise money to send impoverished children to school. More than a hundred kids get help with high school and college costs through the program. “Only those kids with high academic standing can apply,” explains Althauser. “And kids must maintain high grades, or they lose their scholarship to someone else who’s willing to put forth the effort.” She donates her yoga earnings to the Yoga for Castaway Kids program, which supports a young girl in high school, and Althauser and her husband support a young woman in college.

Althauser also makes room in her semi-retired life for spirituality and artistic self-expression, and the two combine in her creation of mandalas. Elaborate patterns of color and line, they show her inspiration from Mayan, Norse, and Goddess mythology. But while elaborate, she draws them with simple Sharpie felt-tip pens. “I started creating them when I was in high school,” she says. She decorated a set of luggage with the shapes, and in college, she put them on posters.

But then she lost the art until recently, when a woman offered a mandala workshop in Mexico. “As soon as I saw the advertisement, something clicked inside me, and I began to draw using the same style as before, but in the form of mandalas,” says Althauser. “I knew I needed to find an art form I could use to express my spirituality, and when the mandala came across my path, it was…one of those divine inspirations.”

The mandalas are three feet square and take several months to complete. Once done, Althauser gives them away to friends. “I can’t think about selling them,” she says. “They are a part of me.”