Installing sheetrock. Cutting firewood. Painting rocks. These aren’t the types of jobs you would imagine doing after retirement. But that’s just what Kevin and Julie Curfman have tackled while serving in disaster relief during the last three years.

For 30 years, Kevin Curfman was a firefighter in Chehalis, retiring in 2017. As his career progressed, his plans for retirement slowly formed. While firefighting, he experienced a lot of trauma himself and witnessed victims and other first responders experiencing trauma. Within two years of being hired on with the Chehalis Fire Department, Kevin joined the Lewis County Chaplaincy Services. As a fire chaplain, he was able to reach out to people in crisis. He is now currently the president of the program.

About 20 years ago, Kevin joined the Lewis County Debriefing Team, helping others deal with critical incident stress. The Debriefing Team works with both First Responders and civilians, helping them process any trauma they’ve experienced in times of crisis. Kevin has also been a volunteer firefighter for 40 years and counting.

In 2002, the Curfmans started a wildland firefighting business based out of Ontario, Oregon. Every summer since, they have used Ontario as a base to offer their services to fight fires in Oregon. Julie worked off the engines also.  As they worked the fires in Oregon, they saw some of the wildfire devastation and personal loss people experienced. The Curfman’s calling of serving those who have been through trauma grew a little stronger.

Through the years, Kevin and Julie have had the opportunity to go on mission trips with their church, Centralia Nazarene. Trips to El Salvador and the Dominican Republic confirmed that they wanted to minister to people in crisis once Kevin retired.

In the fall of 2017, the Curfmans founded Firelight Ministries. Their purpose is to take their travel trailer to disaster sites in the United States and help other organizations with clean up and recovery efforts. They are completely self-contained, bringing their own food and water. They installed solar panels to the roof of their travel trailer and have a generator for emergencies.

For their first mission trip, they connected with RVs On A Mission through the Nazarene church. ROAM’s purpose is to provide a central clearinghouse to match volunteers with mission opportunities. Typically, they serve at summer camps, churches and in disaster relief. In October of 2017, after connecting with ROAM missionaries in Lake Jackson, Texas, the couple drove to Salida, Colorado to buy a travel trailer, sight unseen. Enroute to Lake Jackson, they discovered water leaking from underneath and had to stop and repair the water reservoir. Even volunteers have car trouble but after the repair was made; they were on their way to Texas.

In Lake Jackson, they spent three weeks installing sheetrock in homes that had been flooded by Hurricane Harvey. “When we were loading up to go to Lake Jackson, Kevin was looking at his sheetrock tools,” Julie said. “He doesn’t really like sheetrocking. He said, ‘I don’t want to be sheetrocking,’ but he put them in any way and that’s what we did.”

Julie and Kevin’s next chance for a mission trip was in 2018. This time they were assisting with wildfire recovery efforts from the Tubbs Fire of 2017. They contacted the owners of the Mountain Home Ranch in Calistoga, California. This 350-acre ranch lost 30 buildings in addition to the rest of the fire devastation. While helping in Calistoga, the pair spent their time cutting up fallen trees and cutting firewood.

After returning from Calistoga, members of their church requested that they lead a group on their next trip. Leroy and Janis James joined the Curfmans in October 2019 as they traveled to Paradise, California to assist in clean-up efforts from the Camp Fire. The two couples connected with the Chico Nazarene Church. The church sheltered a total of 600 people who were left without a home after the fire. They connected the couples with the Paradise Hope Center. They spent much of the time there building fences and cutting trees. Julie and Janis even painted rocks.

While most of their work has been physical, much of it has also been listening to the stories of the survivors. In Paradise, they had the chance to visit with Samantha, a single mom, who narrowly survived the fire. Her story includes running out of gas, running from the fire, jumping into a car with strangers and seeing the fire shooting through the trees. Samantha’s escape story is just one of thousands. The need is great in Paradise and the Curfman’s plan to go back soon. To read more about Samantha’s story and to follow along on the Curfman’s efforts, follow their Facebook page, Firelight Ministries.

Firelight Ministries is a culmination of the Curfman’s career in firefighting, chaplaincy and missions. They will continue going where they’re needed and making a difference in the lives of many through disaster relief. Kevin encourages anyone who would like to come on their next trip to contact them. “We’ll fit you in somewhere,” he says. “You can always paint rocks!” 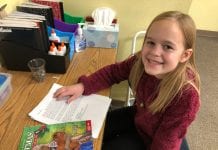 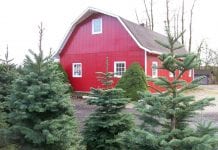 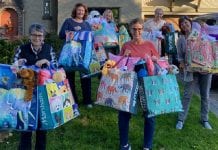 Providing Hope and Dignity With Lewis County Luggage of Love