Acceptance Camp is a transformational place for those, regardless of age, who struggle with Autism as well as ADD and PTSD. Family Camp Weekends and Dungeons and Dragons weekends happen throughout the summer. Families spend their time at Acceptance Camp decompressing and enjoying nature in a judgment-free place.

Acceptance Camp Field Director Seth MacNeely and his family reside at the camp, while Camp Director Danny Raede, who is also the founder of Asperger Experts, comes from Seattle for Acceptance Camp weekends.

When we first arrived at Acceptance Camp, we weren’t sure we’d found the right place. Then we spied their signature 1930s barn and heard laughter emanating from inside. The sounds of kids laughing is an auspicious beginning. The laughter is from a group ranging in age from 12 to 40 years old who are on the Autism Spectrum enjoying a game of Dungeons and Dragons.

Struggling with social situations and some form of Sensory Processing Disorder are common symptoms for those on the Autism Spectrum. Sensory Processing Disorder is different for everyone; but, for example, imagine your hearing is far more sensitive to sound, to the point where you can’t ignore even a little background noise. Or take the sense of touch, taste, sight or even emotion and amplify how your brain processes all the information that those senses gather. It can be overwhelming and sends many kids into defense mode. Put a child who struggles with both social interaction and the bombardment of sensory input into a busy classroom and it’s a recipe for stress.

That is what’s so brilliant about a place like Acceptance Camp. “Having natural spaces is incredibly important to reduce stress and allow kids to form social attachments and connections,” explains Seth, “outside of all the stimulus we have in the world.”

Acceptance Camp inhabits 20 acres on the county line between Rochester and Centralia. There’s a camping area with restrooms, showers and water stations, a barn, bonfire area with a 100-year-old orchard, a labyrinth, open meadows, woodland and a pond. There are also little touches throughout like torches, a hammock and swing. A great deal has been achieved in two short years.

I wondered how the partnership for Acceptance Camp came to be. “We met at a retreat in Big Sur California,” explains Danny. “It was about different perspectives in the world and we had the same vision of creating a space where people could have a pause; where they could feel accepted and hang out with others, and there’s no therapy or agenda. We’ve had times around the campfire where I don’t even know what time it is because I haven’t looked at a clock all day. You eat when you’re hungry, talk to people, go to bed when you’re tired. That’s so rare for people to experience.”

And that experience can lessen symptoms for those on the Autism spectrum.

“For kids who are dealing with spectrum issues,” explains Seth, “being in a place that doesn’t have walls, means there are no walls to bounce off. You have a space that’s big enough to absorb whatever energy you feel the need to express. The space is large enough to hold that. And because you don’t feel hemmed in, you’re less likely to even express it. So, it’s really interesting that we have never had a kid stay isolated. We’ve never had interpersonal conflict and some of these kids have been taken out of school because of behavioral issues.”

“Regularly we get the comment that ‘my kid doesn’t like swimming’ and fifteen minutes later he’s in the pond catching frogs,” Danny says.

Both Seth and Danny are firm believers in nature as therapy.

“It’s not a question of us doing anything,” says Seth. “We’re not doing a self-development workshop and going into feelings, which is great. And has its place. It’s more about creating an environment that doesn’t have any impediments to that sort of thing, and then getting out of the way.”

Seth attests that science backs up the claims that nature is good for you. Some might argue that people aren’t going to get better by sitting in the woods, “but, funny thing,” says Seth, “the science says maybe they will and it’s a lot less expensive to try than drugs. So why don’t we try that? I’ve seen it happen over and over here. The parents when they arrive are just as stressed as the kids. This gives them the chance to be around other parents who empathize with what they’re going through. And to give them a chance to relax for the first time in ages is really important.”

Empathy is just as important as nature for destressing.

“Parents know that the people here are going to accept their kid as they are,” says Danny “and they don’t really need to be on guard and go around apologizing.”

Danny, who has Asperger’s, can attest to the healing power of nature.

Peggy, whose child is on the Autism spectrum, has camped at Acceptance both summers with her family. She appreciates the opportunity for her child to make friends and for her to make connections as well.

“I do feel isolated,” says Peggy. “So, coming here is my chance to meet other people. And there’s at least some understanding among all the people here so you feel like you can relax because the life they’re describing sounds exactly like mine. It’s nice to know that you’re not alone.”

Seth and his wife Yvonne MacNeely also run the property as Gray Owl Hallow, where anyone can camp when Acceptance isn’t in session. The future vision for the camp is to acquire the neighboring 20 acres to build group and cabin facilities. The cabins may remind future campers of a Hobbit Village. All development of the properties will be carefully implemented to preserve the biodiversity that exists there.

To find out when Acceptance Camp weekends are taking place, check them out their Facebook events section. There’s a suggested donation of $200 for a weekend. However, no one has been turned away for an inability to pay. In these cases, it becomes “pay what you can.” 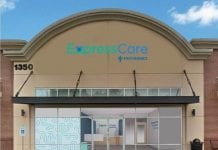 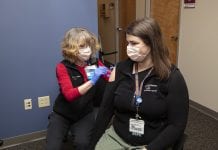 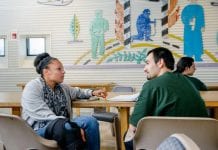