From its inception, SCJ Alliance has been a company that embraces, supports and celebrates women. The firm’s many female engineers mentor girls and young women, sharing what they have learned through experience in a male-dominated field. Now that support is taking on a different form. SCJ is adding its voice to a new cancer research effort, ResearcHERS.

The campaign is part of the American Cancer Society’s (ACS) ongoing work, with an emphasis on removing obstacles for women-led research, bolstering the careers of women researchers, and supporting a more robust pipeline of female leaders in cancer research.

According to SCJ President and CEO Jean Carr, the company’s connection to cancer research is longstanding. “The fight against cancer has been an important focus of charitable contributions from the early days when one of our founders was diagnosed with breast cancer at her first-ever mammogram,” says Carr. Much of SCJ’s early fundraising was through events like Making Strides against Breast Cancer and the Susan G. Komen 3-Day for the Cure. “This year, another one of our principals was diagnosed with a very rare form of cancer and it made us think about the disease from a broader perspective.”

Carr’s sister was also diagnosed with cancer several years ago and it turned out she had a BRCA gene mutation, a condition first discovered by ACS researcher Dr. Mary-Claire King.  BRCA1 and BRCA2 are human tumor suppressor genes typically in the cells of breast and other tissues. If they are mutated, affected DNA is not repaired properly, leading to an increased risk for breast cancer. King’s discovery had a very personal and significant impact for Carr.

Corinn Wohl says King saved her life. Wohl is the chair of ACS’s South Puget Sound Leadership Council and a breast cancer survivor. “King’s work was innovative,” she shares. “At the time, people believed breast cancer was caused by a virus. Dr. King was way out there in her thinking and because of that, it saved my life and the life of my daughter and future generations.”

Wohl is thankful for the support of a company like SCJ. “They are one of the most highly-respected organizations in our region,” says Wohl. “When you have somebody with that type of recognition in the community who is stepping up and saying, ‘This is an important cause that we should get behind with funds,’ it creates bigger visibility for the American Cancer Society and women researchers in general.”

Her involvement with ACS began after her diagnosis in 2016. Wohl, who is also the director of community engagement at Twinstar Credit Union, began fundraising and participating in events like Making Strides Against Breast Cancer and Relay for Life. The more she learned about the organization, the more she wanted to support their work.

“A lot of people think that the ACS is so large that they don’t need help,” Wohl explains. “It’s the second-largest funder of research in the United States and it operates with no government funding whatsoever and is run primarily by volunteers. With COVID-19, their ability to continue with their mission is threatened. Because of COVID-19 and the cancelation of so many traditional fundraising events, the ACS is anticipating a $200,000,000 shortfall in 2020.”

SCJ is hoping their ResearcHERS support will help bridge that gap. “We’re doing a push with our staff, sharing about it on social media, and several of us are reaching out to our personal networks,” says Carr. “And anyone can donate to our campaign by visiting SCJ’s ResearcHERS page.  Carr added, “We’ll also continue to participate in cancer walks and other events as we’re able to in this world of social distancing.”

Fundraising is just one of many activities ACS is involved in. “They’re doing amazing things,” says Carr. “They provide free rides to treatment and free housing for people who have to travel to get treatment. They’ve been involved in every aspect of the fight against cancer from research, to education, to support.”

She hopes other companies are inspired to participate in whatever way makes sense for them. “We’re all focused so much on COVID right now, but people are still being diagnosed with cancer and needing treatment,” she says. “I would love to see people filling that funding gap and supporting research that can help identify other breakthroughs related to this terrible disease.”

For her part, Wohl would like to see SCJ’s participation in ResearcHERS mobilize more women to make donations and learn about the ACS. “They may even decide that they want to become ResearcHERS Ambassadors themselves,” she says. “That would help to extend this network even further.” 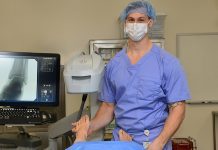