Noted chef Laurel Khan believes there is something magical about food. It is something that can be prepared in many different ways, and in her case, a touch of whimsy works wonders.

Khan owns Mackinaw’s Restaurant in downtown Chehalis, and while it is listed as a gourmet dinner restaurant, the chef protests, saying it is “upscale but comfortable.”

Whatever it is, Mackinaw’s is the highest rated restaurant in Lewis County, as cited by Yelp, among others.

It features a changing menu depending on the season, and offers everything from hearty steaks to fish and a number of other interesting signature dishes that Khan created. She says there is a foreign twist to virtually everything she serves, given the influences of her Pakistani husband.

“Curry, for instance, comes in many levels of strength and flavors and it is used almost everywhere around the world,” the chef explains.

This means that diners find a touch here and a touch there to make a dish more interesting and bring out the flavor of, say, a really good piece of beef.

“Eating is something that should be enjoyed,” she says. “Once the food is plated, you can depend on what we’ve done in the kitchen to make it memorable.”

Khan is also making some news these days. At the end of January, she is opening a restaurant in Chicago. That’s quite a departure from small-town Chehalis, most would think.

Not really, not if you get to know Chef Khan.

The Chicago restaurant — located close to Michigan Avenue, which is also known as Chicago’s Miracle Mile — is named Curious and will feature an even more whimsical take on food. Curious will be like Mackinaw’s in many ways, only more so.

“We already have customers here in Chehalis that want to make reservations in Chicago,” she said, smiling.

Given her background, it’s not that far of a leap for Khan to open for business in Chicago. She grew up in Minnesota and worked at a large, luxury restaurant in Chicago before graduating from the Oregon Culinary Institute. She opened Mackinaw’s 10 years ago, and she picked that name because of its regional Midwest flavor. Mackinaw is an area in Michigan and it is also a popular local fish.

Khan says that in a large kitchen, she was buttonholed into very specific aspects of the operation, which she didn’t like.

By opening a successful restaurant, Khan was given the opportunity to do everything. Kitchen prep is the most important part of being a chef, she explains. And for her, it is the most enjoyable aspect of the business. The cooking is the easy part.

“I’m not happy unless I’m cutting up an onion,” she smiles, after returning from the M&K Town Store a couple of doors down from her on Market Boulevard.

Chef Khan says she cannot operate a restaurant unless it is close to a local market.

Food wholesalers are fine because they deliver. They’re not less expensive than the local market and what they offer many times is restrictive. Besides, on a whim, she may want another onion or a spice. Can’t wait for the delivery truck.

What makes owning a restaurant hard work are the constant little interruptions during the day. Say, when a writer comes by and wants to chat about doing a story. Or there is a food delivery.

Chef Khan begins her day at 10 a.m. and is ready to cook far in advance of the first diner.

But the interruptions come and go, which means there is plenty of serious time to do the essential work of putting things together so that diners walk away with that feeling of satisfaction.

Mackinaw’s seats about 44 diners, while the Chicago store will seat about 38.

In this day and age of fine dining, these are the ideal sizes for a great chef to prepare really good and exciting food and still be profitable enough to remain open.

Gone are the days when a gourmet restaurant meant more than 100 seats. It’s just too much work and the margin for error — both from a culinary standpoint and a business plan — becomes way too tight.

When she’s in Chicago, her son, Yasser, who has been trained from the ground up by his mother, will run Mackinaw’s.

And when she’s at Mackinaw’s, Chef Khan says, a local staff has been put into place and fully trained back at Curious.

Going back and forth between Chehalis and Chicago only makes sense. After all, Chef Khan is a non-stop bundle of energy, enjoying her life in every way possible.

So to be on the run just seems natural as this morning, having arrived from the Windy City late the night before, it was straight to the kitchen and those wonderful onions. 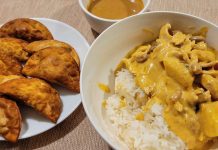 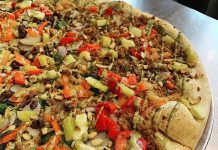 Fresh and Innovative, Vic’s Pizzeria in Olympia is a Local Favorite for College Students 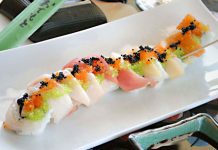