For the second year, the Lewis County Chapter of the American Association of University Women is sponsoring its virtual LUNAFEST film festival on Saturday, April 24 and Sunday, April 25, celebrating women in film. The ticket price is $10. All seven of the independent films are directed by and about women in our world.

Just think…you can view award-winning films in the comfort of your own home by accessing the films on your computer, tablet, or smartphone! Host a “Watch Party”! There is even “closed captioning” for those who need or want it. The films will be available to watch at the viewer’s convenience during a 24-hour window on Saturday, April 24 – Sunday, April 25. You may purchase tickets for LUNAFEST-2021 for yourself and others online on the Lewis County, Washington, Branch of AAUW website or through the LUNAFEST website. A streaming link and password will be sent on the morning of the event to all who pre-register.

This year, AAUW is also offering an online raffle including many one-of-a-kind items. The raffle is listed on the same website as the film registration.

LUNAFEST is a nationally touring film festival featuring award-winning films by and about women.  All the directors of the films are females. “Why women directors?” A little-known fact is that women are vastly underrepresented in the entertainment field of directing and producing films. This project sponsors and mentors women filmmakers worldwide, giving them a voice in the industry.

In 1999 two California women created the LUNA BAR — the first nutrition bar exclusively for women. Fast forward to 2001, when these same successful women wanted to champion women and spark change in the world. Their vision inspired them to create LUNAFEST — the world’s first all-female traveling film festival. For the last twenty years, LUNAFEST has showcased the work of over 170 women filmmakers. Each year a few films are chosen from among hundreds of entries to be included in LUNAFEST. The festival travels to over 200 cities each season, has raised $6 million for non-profits and held over 2500 screenings. This year proceeds nationwide go to Chicken & Egg Pictures to finance and mentor females in filmmaking throughout the world.

The films are diverse, and the subjects, locations and content are eye-opening. They are poignant, often humorous, and provocative. Each year the festival seems to contain one film that is a little edgy. That is why they and we recommend a 16+ age limit for the showing.

Contained in the seven-film offerings for this year is Overexposed,” a behind-the-scenes look at the film team that captured the daring story of the Women’s Euro-Arabian North Pole Expedition. Another of the films is titled A Line Birds Cannot See, ”separated at the border, a 12-year-old set out on a harrowing journey to the U.S. to find her mother.”  Knocking Down Fences tells of AJ Andrews, the first woman to win a Rawlings Gold Glove Award, and her struggles to succeed as one of the best professional softball players in the world.

As always, with the LUNAFEST offerings of previous years, the viewer will continue to muse over the films long after having watched them.  Don’t miss LUNAFEST – 2021! 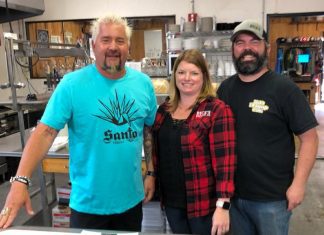 Centralia's own Dick's Brewing Company was featured on Food Network’s “Diner's Drive-ins and Dives.” Touted by the show as, “a real-deal meat market stackin'...