The men’s basketball team at The Evergreen State College is hard at work this season, not only through competition and conference play but also through forming a greater sense of community. Franklin Johnson is the interim head coach for the team this season, and in this new position, he has plans to expand the definition of teamwork both on and off the court.

Johnson is a graduate of The Evergreen State College and was a member of the men’s basketball team throughout his college career.

Johnson says that so far, the head coaching position has been a learning curve, but his previous experience as a student and player has been an advantage. And as the season progresses, Johnson has begun to develop long-term aspirations for the team, both on and off the court.

“We’re starting to develop what we want this program to look like,” explains Johnson. “And we think it’s going to take a second, but we’re ready and can accept the challenge.”

Toward the beginning of the season, the team played against out-of-conference teams, including a range of exhibition games. Exhibition games don’t count toward the season’s record but do serve as extra practice and preparation. The exhibition games were especially important this season because they allowed the team’s new players and coaches to establish a team rhythm and develop an approach for competitive games that are scheduled for later in the season.

This season, Johnson plans for the team to make a greater impact on Evergreen athletics through the support of student-athletes and fellow sports teams at the college. And he is weaving this commitment to service into the team’s culture, encouraging players to participate in volunteer work and become active participants in the campus community.

“I think a lot of people talk about wins and losses,” says Johnson. “And one major goal that we have isn’t actually about wins and losses for us. It’s really about helping our school, helping Evergreen as a whole, and as a college with what we bring to the table. We can make baskets, we can score, do all these cool things. But I think it’s really about what else can we do, what else can we offer.”

The team hopes to mentor fellow athletes, continue volunteer work, and make a positive impression across Thurston and surrounding counties.

As the men’s basketball team heads into the height of the season, competitive conference games are on the horizon. And alongside this conference play, Johnson says that the team is particularly looking forward to the season’s remaining home games. As part of the team’s commitment to giving back, home games will host a range of community-centered events that highlight local businesses and youth sports teams.

“We always are looking forward to our home games,” says Johnson. “Because we’re trying to build the Costantino Recreation Center into a place that’s really hard for opposing teams to come in and get wins at.”

As the players and coaches cultivate a new team culture, Johnson also has plans for the Costantino Recreation Center to be a communal gathering place on game days. With fast-paced play and a consistent stream of baskets being made, Johnson says that the men’s basketball team has a style of play that is fun to watch. And through their involvement in the greater community, Johnson hopes that different facets of the community feel welcome to attend games and participate in team events.

“We’re really trying to become something that people want to come and see,” says Johnson. “That people are gonna get together and come and see. And create a community event throughout all of our home games.” 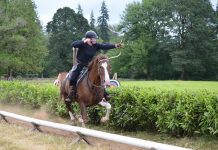