Cynthia and John Murray of Lewis County are in the dog-treat manufacturing business. On a personal level, they have a pet-loving lifestyle. The two go together well. Like a lot of animal lovers, their facial expressions soften when they talk about their pets, both those with them today and those who have passed on. Through the years, it’s been Odie, Goldie, Auburn, Dozer and Chip. There’s also a string of cats bearing such names as Wall-e, Gizmo and Miss T. However, where John and Cynthia are at today in business started with Odie.

Cynthia was born to a family of five with two loving parents, a twin sister and a brother. Born deaf, she first attended school for those with hearing impairment before attending public school. It’s a huge understatement to say that growing up deaf in a hearing world was a challenge for the little blonde, blue-eyed girl.

Cynthia had one fear that followed her from childhood, through college-age, to living on her own for the first time. She felt paranoid someone would grab her when she was asleep. Even sharing a room growing up with her twin sister caused her great anxiety. She slept with a softball bat by her bed and stuffed pieces of wood into the window jam to secure it.

When living on her own as a young woman, the fears continued. She first considered getting a companion dog but a friend introduced her to Dogs for the Deaf, since named Dogs for Better Lives. After an eight-month wait, Cynthia received a three and half-year-old mixed breed fox terrier named Odie. The little white and black dog was Cynthia’s best friend and constant companion. He came with health difficulties and required a special diet. “Odie was allergic to everything, even cats,” Cynthia recalls.

Odie became Cynthia’s ears. He alerted her to any alarms or bells, ringing telephones, visitors at the door and even once when she dropped her wallet in an airport. They loved each other like crazy. “This little black and white dog changed me,” she says. “He turned me into a confident woman. I was no longer afraid to sleep at night. He made my world accessible and alerted me to the cacophony of sounds around me.”

Odie passed away in her arms at the veterinary office from old age and kidney failure. Letting Odie go was difficult, yet Cynthia encourages those who lose pets to allow themselves time to grieve and heal but to not close themselves off to future pet relationships. There are more dogs out there that need love. “Odie would want some other dog that needs a home desperately to be as lucky as he was,” Cynthia says. “He wouldn’t want me to be without that love again.”

Such as it was with Goldie, a yellow lab mix puppy who came into her life. Goldie, however, was extraordinarily quiet and did not alert Cynthia to sounds. Rather, Cynthia had to teach Goldie to react. It was during those days that Cynthia and John met. Their early dates were built around taking Goldie for walks.

Next came Auburn, a little dog of undetermined descent. After were Dozer and Chip. Today, it’s just two cats with Dozer and Chip who are also both deaf. “So, I live with three deaf women,” John says with a laugh.

From their love of dogs came the Murray’s business, 4Legz. “We were trying to figure out something to do as a business venture,” John recalls. “We finally came up with the idea of doing something with dog treats.”

Remembering the allergy difficulties with Odie, the couple decided to make treats from ingredients they knew were good for dogs. John and Cynthia talked with Veterinarian Dale Marker of Jackson Highway Vet Clinic. “We take it very seriously,” John says. “There are no chemicals or preservatives in the dog cookies and treats we make. We run this like a human bakery.”

4Legz is committed to keeping the Centralia-based business products human-food grade when most dog food and treats are feed grade. Because they are made of real food ingredients, the smell of their product is distinguishable from other manufacturers. When packaged in plastic bags, the delicious fragrance isn’t as noticeable. Thus, they sell best in stores that carry bulk treats such as Mud Bay Pet Supply. Find the tasty treats locally at Totally Pawsome and Pacific NW Pet Center.

“As our business grows, we hope to be able to hire minorities with disabilities because those are the last ones to get hired,” Cynthia says. “I know how hard it was to find jobs over the years.” The couple works with students who experience a developmental disability from area schools and the Visions program.

Cynthia wrote a book titled “For the Love of Dogs, a Deaf Woman’s Journey” of her story with the challenges of growing up hearing impaired, the difference Odie made and her life with John to the present day. It’s available for $10 on the 4Legz website with all proceeds going to pet rescues. 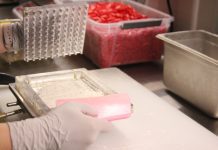