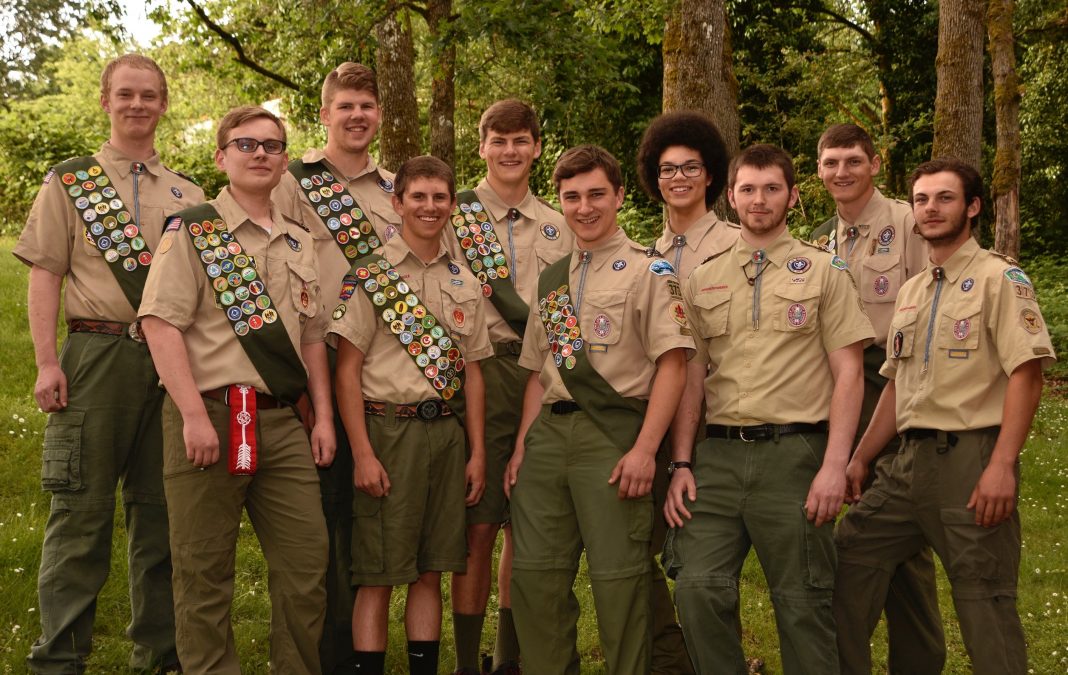 Scouts BSA Troop 373 from Chehalis is celebrating 12 new Eagle Scouts! “This is the largest group of young people to be recognized in one troop Court of Honor in recent memory,” said Ralph Voelker, Chief Executive Officer of the Pacific Harbors Council of the Boy Scouts of America. Becoming an Eagle Scout is the highest honor given in the 109-year old organization. Only four percent of Scouts ever achieve this rank. “These young people are some of our best and brightest in the Lewis County area and I am extremely proud of their accomplishments,” said Bob Lund, Troop 373’s Scoutmaster.

Eagle Project: Benches for Chehalis Airport Trail. I designed and led Scouts in constructing three benches. The benches have heavy concrete bases, welded steel frames, and visually pleasing backrests. These were placed along the walking trail on the top of the levee that surrounds the airport. The heavy bases prevent theft, but the benches can still be easily transported as needed when improvements are made to the levee. The walking trail along the levee is used by people of all ages, and the benches provide the only resting places along the two-mile trail.

“As an Eagle Scout, I take pride in knowing that I have helped my community for years to come. It took a lot of effort to complete the rank while being involved in numerous after-school activities. Through the process, I have learned how to lead groups of people and how to manage and plan schedules. I learned not to assume that every person has basic woodworking skills and I learned to teach these skills.”

Eagle Project: New Flag pole at Scout Lodge. I wanted to replace the flag pole in front of the Scout Lodge for my project because of how run down the old one had become. Due to its disrepair it hadn’t seen much use. So, with money gathered for the project, I purchased a new flag pole, uprooted the old flag pole and replaced it. By doing this I hoped that it would be used more and add to an already very interesting old building.

“It is a great honor to be an Eagle Scout, but what truly tells me the importance of my goal is the friendships and experiences I collected on my way to reaching it. I will never forget some of the crazy adventures I went on and all the people who helped push me towards a goal I occasionally try to run away from. Certainly, I wouldn’t be the person I am today if I hadn’t decided on a whim to become an Eagle Scout and seen it through to the end.”

Thomas Even, 16, son of Theodore and Jeanna Even Chehalis, WA.  W.F West High School GPA 3.6. College/Career: I plan to attend a two-year community college before attending a 4-year university. I don’t know how far I’d like to take my education yet. The degree I’d like to earn would be computer science, and I hope to be able to work for a tech company like AMD or Nvidia.

Eagle Project: Repaint all City of Chehalis Fire hydrants. There were over 400 hydrants that needed to be cleaned; significantly more than we had anticipated, but we managed to complete the project in less than two months.

“I believe that being an Eagle Scout means that you have put enough effort into following the ideals of Scouting that you end up becoming the ideal Scout. You’ve put enough energy into improving yourself and your community that you are given the distinction that is the Eagle rank. In essence, you become a person that others look up to, someone that’s trustworthy, loyal, and embodies all of the other tenants of the Scout Law.”

Eagle Project: Address Signs for Salkum Fire Dist.  We first had to mark the intended site at each driveway, so the utilities could locate any wires. Then we placed posts and signs. This helps the first responders locate the correct house in the event of an emergency.

College/Career: Centralia College – Biology Major – Planning to be a Clinical Molecular Geneticist – Will be volunteering at UW Institute of Stem Cell and Regenerative medicine

Eagle Project: Restoration of the W.F. West baseball grandstands. Major cleaning was done, including removal of moss and trash; pressure washing the stands and pavement, repainted behind baseplate of the field with new green paint. A 60” x 69” sign was also made using vinyl cutting machines at school to help guide the community. Also laid down new gravel on paths around the stands to make the trails last longer.

“Being an Eagle Scout means a lot more than just a rank. It is a symbol of what I have learned over the journey through Scouting. Without being in Scouts and earning this rank, I would not be half the person I am to this day. I’ve been in Scouts since I was in the second grade, and since then, a lot of my time and effort has been poured into Scouting. With all of that time, I learned hundreds of lessons, not just practical skills but self-growth and moral lessons I could not learn in any other place available to me. The connections and friendships that I have also developed here are going to last me a lifetime. I will continue to live on what a Scout stands for, for the rest of my life. Once an Eagle Scout, always an Eagle Scout.”

Eagle Project: Address Signs Salkum Fire Dist. I worked with the Fire Department to call for utility locates for each address. Each address had to be marked with a white flag before the locates could be completed. Then after the locates were completed I enlisted volunteers to help with the installation of the signs.

Eagle Project: New roof on restrooms at Penny Playground. I reroofed and removed the skylights in the bathroom at Recreation Park in Chehalis. I also painted the outside of the bathroom as well as the underside of the overhanging roof. The project was pretty expensive, so I had to ask various people, businesses and corporations for financial support.

“My Eagle Scout rank means so much to me. It is the greatest accomplishment in my life so far. I have learned many life lessons along the road to getting my Eagle rank such as to always help people whenever they need it because there is a good chance that they will return the favor. I also learned to stay true to my morals, even when I might be embarrassed or be put down for it. The Eagle path also taught me to take care of my person as well as my belongings, especially if the belongings aren’t mine. Being an Eagle Scout to me means that I am held to a higher standard. I believe this because through acquiring the Eagle Scout rank, I have had more life training than the majority of the population. I would recommend going through the path to Eagle to any young boy and girl because they will be better prepared for life if they do.”

“What being an Eagle Scout means to me is being honest and trustworthy. This is because this is still how I live my life and that is how I lived out my Scouting career.”

Eagle Project: Numbered farm stalls at SWW Fair. Project consisted of routing numbers and painting approximately 300 signs with booth numbers and installing them at the grandstand hall and exposition hall at the Southwest Washington fairgrounds.

“When I began Scouting, Eagle Scout rank seemed like an impossible feat but as I got older and grew with the troop and my patrol, it seemed more reasonable. Although we sometimes bickered or had disagreements, we were able to get over these hurdles and build long lasting relationships. Through Scouting I was introduced to nature. Environmental nature and the nature of others and social interactions in general, as well as ways in which we can all grow together.”

Eagle Project: Address Signs Salkum Fire district. Placed markers for intended signs at every driveway so utilities could be located. Then post and signs were put in. This helps the first responders locate the correct address in the event of an emergency.

“My Step Father Jon Guyer is an Eagle Scout from Troop 373 as well as my 2 older brothers Jon Paul Guyer and Beau Stidham. My younger brother Brody Stidham is on his way; he is Star rank and my little sister Tessa Stidham is 2nd Class Rank. My mother, Kendra Guyer is the Scout Master of our Scouts BSA Troop  373 (all girls).  Scouting is a huge part of our family’s life.”

Eagle Project: Built Picnic tables for the City of Chehalis Parks Department to be used by the public and encourage people to enjoy the parks around town.

“An Eagle Scout embodies the Scout Oath and Law, will always do the right thing, and will always face the problem rather than turn away and forget about it.”

Troop 373 is chartered by the Twin Cities Rotary Club and has been part of the community since 1968. In the past 51 years, Troop 373 has produced 153 Eagle Scouts. The Troop is one of nine Scouting units between Chehalis and Olympia and includes one of the first all-girl Scouts BSA troops in the Lewis County area.  Two of the girls, Allison Hilliker and Brianna Powe are on track to become the first female Eagle Scouts in the local community according to Scoutmaster Kendra Guyer. Together these young people have contributed more than 1,600 volunteer service hours benefiting the local community since the first of the year.

Becoming an Eagle Scout involves much work including earning at least 21 specific merit badges and producing a hands-on project that benefits the local community.  Scouts must demonstrate the spirit of the Scout Oath and Law.  Becoming an Eagle Scout also helps with a young person’s college education.  Many colleges and universities place a high premium on Eagle Scout applicants and numerous scholarships and grants are available to the Scouts.  Scouts interested in military service also receive preferential treatment because of their rank.

Scouts BSA Troop 373 is part of the Pacific Harbors Council of the Boy Scouts of America which is responsible for Scouting units across the South Sound from Federal Way to Chehalis and from the Washington coast to the Cascade foothills.  There are more than 9,000 Scouts and 4,000 adult volunteers registered with the Council which includes Cub Scouts, Scouts BSA, Sea Scouts, Venturers and Explorers. The Pacific Harbors Council has been serving Southwestern Washington since 1928.

The mission of the Boy Scouts of America is to prepare young people to make ethical and moral choices over their lifetimes by instilling in them the values of the Scout Oath and Law. 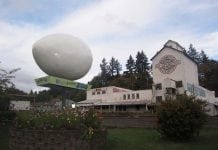 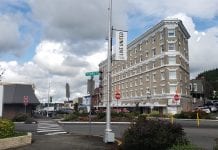 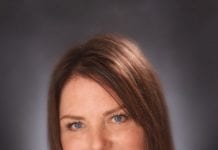