Walking into the Veterans Memorial Museum, it is obvious that this is a special place. The museum was founded by Lee Grimes and the museum’s mission has been carried on by current director Chip Duncan.

Chip became the director of the Veterans Memorial Museum in 2010 following Lee’s retirement. He is one of two paid employees. The Museum is a registered non-profit so they depend on volunteers to help with a lot of the work.

Chip explains that the inspiration for the museum was born from a conversation Lee had with a World War II veteran.  The veteran told Lee that time passes and that stories get forgotten, which prompted Lee to begin the museum to share the stories of our military men and women.  The museum strives to honor and remember every single person who has served in the US Armed Forces, no matter if it is a time of peace or a time of war.

Chip says, “The museum is more than a historical snapshot. The men and women who were there deserve to be remembered. And we tell their stories, from cooks up to generals.”

I asked Chip if he could pick a favorite story from his time at the museum. He chose to tell me about Jeffrey Shaver. Three years ago Jeffrey’s mom came into the museum and asked Chip if he could help her find a place for her son. Jeffrey had been killed in 2004 while deployed in Iraq and she was looking for some place she could bring Jeffrey’s things and have his memory honored. But before she handed over Jeffrey’s belongings to the museum, she asked Chip to hear Jeffrey’s story first. Chip says, “I told her, ‘You came to the right place.’”

Chip continues, “She pulled out a large photo album and turned to a page where Jeffrey was wearing a Cub Scout uniform and was probably ten or eleven years old at the time. His mom said that was the day that Jeff’s story started.” Jeffrey had learned about basic first aid at Cub Scouts and went home and excitedly told his mom that for the rest of his life he wanted to help people.

Jeffrey Shaver trained as a paramedic and later wanted to be a Lifeline EMT. Which as Chip describes, “That’s like the Top Gun of EMT. You have to have helicopter experience and training as a nurse practitioner.” In 1999, Jeffrey joined the National Guard where he was able to achieve this training. In 2003 Jeffrey deployed to Iraq to work in a hospital.

In 2004 a doctor from a local women’s clinic came into Jeffrey’s hospital and asked for help. They were out of supplies. Chip shares, “Jeff was all about helping people, so of course he and few others gathered supplies to take to the women’s clinic.”

Those who knew Jeffrey said that on the drive over to the clinic, he had a special smile. He was close to getting to go home for a couple of weeks and he was planning to propose to his girlfriend in Paris.

The humvee drove over a road side explosive and Jeffrey was killed. Chip shares, “The explosive happened to hit the humvee right where Jeff was. Miraculously, no one else was hurt.”

Chip says, “Jeff’s whole life was about helping others. His tombstone is inscribed with words that he chose as his life’s motto when he was fifteen years old, ‘Love and live with passion.'”

Chip never met Jeffrey, but he shares Jeffrey’s story with such passion and empathy that I am left feeling a personal connection to this soldier. That experience is true with each additional story Chip has to share – and he has many.

The museum is filled with seemingly endless rows of artifacts and rich stories of individuals who worked to protect the American freedom. “If you were to go to every display case, you’d be here all day.” Chip says.

In addition to sharing the stories of military veterans, the museum has a special space that serves for veterans to come in and have a cup of coffee and a bite to eat. “It’s not an official USO. But veterans come in and they have a place to relax and talk to other veterans.”

Chip shares that Wednesdays are the busiest day for the USO and the museum is always thankful for food donations to be shared with the veterans. “We are always glad when people bring in cookies, or soup, or a danish for the veterans.” Chip says.

The museum is always in need of volunteers, but Chip shares that there are also other ways you can give back to veterans in your community. “You can fly an American flag at your house, that’s a pretty clear sign of support.”

You can volunteer at your local VFW and American Legion posts, especially around Veterans Day. You can give to the Veteran’s Relief Fund which aims at helping veterans and their families get basic needs met and helps to connect veterans with benefits.

Chip says, “In my experience, they just want to hear ‘Thank you for the freedom I have.’ Because that’s what they worked and sacrificed for.” 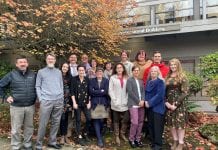 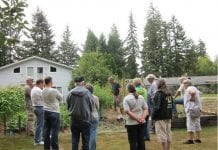 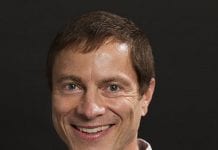